Higher interest rates and a record-large debt burden are taking their toll on Canadians, with the number of households filing for insolvency hitting an eight-year high in the first quarter of this year.

There were 32,239 consumer insolvencies in the first quarter of 2019, according to the Office of the Superintendent of Bankruptcy Canada. That number that includes both bankruptcies and consumer proposals, an increasingly popular alternative to bankruptcy.

It's the highest number of insolvencies since 2011, and marks a 6.1-per-cent increase from a year earlier, the largest such jump since 2009, when Canadians were dealing with the fallout from the global financial crisis. 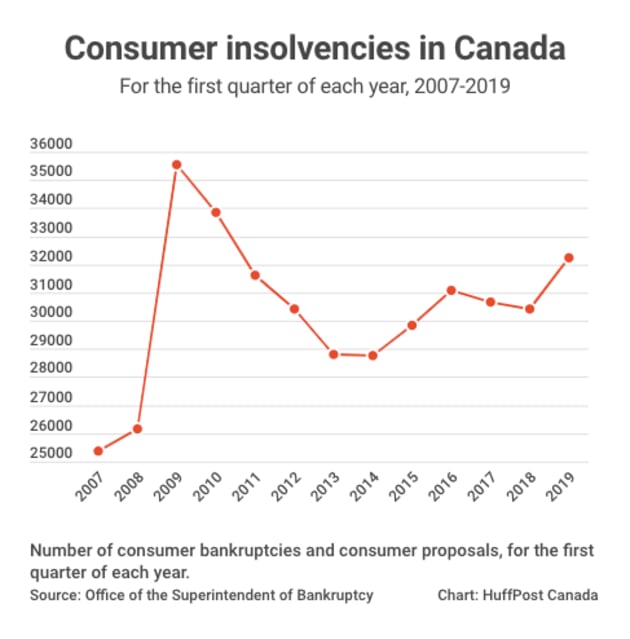 And that statistic is likely just scratching the surface of the problem, said Grant Bazian, president of insolvency firm MNP Ltd.

Many households are in a "financial sweatbox" where they forgo basic necessities and contend with calls from debt collection agencies in order to avoid filing for insolvency, Bazian said.

"We know there are many Canadians experiencing this kind of financial distress," he said in a statement. "This isn't good news but it's something that needs to be discussed so we can eliminate the stigma associated with asking for help and — if it is the best course of action — filing a proposal or bankruptcy."

Bazian cited research showing roughly half of Canadians don't believe they would be able to cover their expenses if they came up just $200 short in a given month. Much of the pressure comes from debt payments, which are eating up a near-record share of Canadians' incomes, at 14.9 per cent.

Household debt rose to yet another record high at the end of 2018, according to Statistics Canada, reaching $1.79 in debt for every dollar of disposable income.

Debt experts had been warning in recent months that the round of interest rate hikes the Bank of Canada began in 2017 would have an effect on consumer insolvencies in 2019 because rate hikes have a delayed effect on households' finances.