The trend in housing starts was 201,983 units in May 2019, compared to 205,717 units in April 2019, according to Canada Mortgage and Housing Corporation (CMHC). This trend measure is a six-month moving average of the monthly seasonally adjusted annual rates (SAAR) of housing starts. 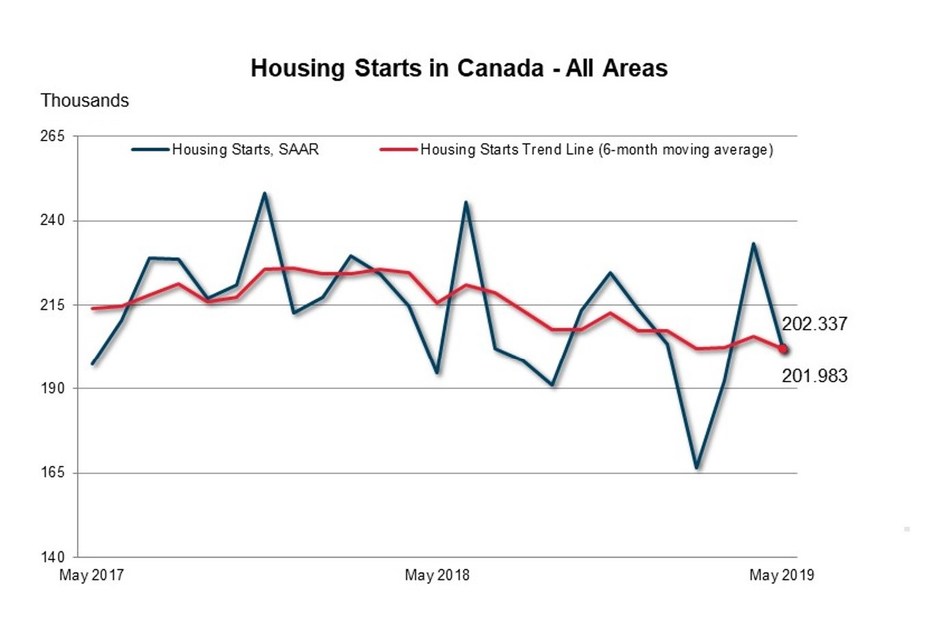 Vancouver
Vancouver Census Metropolitan Area (CMA) housing starts saw a strong increase in May, with multi-family construction accounting for 90% of total starts for the month. Two thirds of the new units were located in Burnaby,Surrey, and Coquitlam, which together saw a number of condominium and rental apartment projects get underway. So far this year, total housing starts are 10% higher than they were in the same period in 2018 as developers and municipalities move to meet demand from the region's growing population.

Kelowna
Housing starts in the Kelowna CMA declined in May, relative to the same month last year, continuing the downward trend seen in the previous three months. Overall, housing starts were down approximately 44% in the first 5 months of 2019, relative to the same period last year. This downward trend comes on the heels of a slower pace of population growth allowing the existing home market to return to balance conditions.

Calgary
Housing starts trended lower in May after a slight up-tick the month prior. New construction activity in the market remains relatively low as builders continue to adjust to sustained levels of elevated inventory and soft demand.

Edmonton
Housing starts trended lower for all units types except semi-detached which experienced a slight increase in May. The slowdown in starts continued to reflect the amount of unsold inventory on the market, particularly among single-detached units.

Brantford
Overall starts trended down in Brantford due to lower trending single-detached and row starts. However, despite the slowdown, row starts remain at a higher than usual level. New single detached home prices continue to rise, making new rows increasingly appealing to buyers who are looking to purchase an affordable low-rise home.

Toronto
Total housing starts trended lower during May in the Toronto CMA with declines being recorded across all types of homes. High homeownership costs continue to weigh on the demand for single-detached and row houses thus resulting in fewer low-rise home starts. Strong pre-construction sales of condominium apartment units over the past two years will continue to translate into starts over time at a varied pace, despite their starts trending lower in May.

Gatineau
From January to May, residential construction in the Gatineau area reached a five-decade record high. This strong increase was attributable mainly to the rise in rental housing starts in the Plateau neighbourhood. The aging of the population and the low vacancy rate have continued to stimulate starts of this type in the Gatineau area.

Montréal
Total housing starts in the Montréal area in the first five months of this year increased compared to the same period last year. This gain was solely attributable to rental housing construction, as condominium and single-family home starts recorded decreases. The low vacancy rates on the conventional rental market and the greater proportion of young households now opting for rental housing have kept stimulating rental housing starts. Seniors' rental apartment construction has also posted strong growth since the beginning of the year.

Halifax
Residential construction in Halifax continues to trend upwards as the total number of housing starts year-to-date increased by 48% compared to the same period last year. While the apartment segment has been dominating the growth in construction so far this year, in May, single-detached starts recorded a strong uptick, expanding by 69% year-over-year. As sales remain elevated in relation to the number of new listings, demand for additional supply is supporting the new home construction market.

Prince Edward Island (PEI)
Total housing starts in PEI were 60% higher in May driven primarily by higher apartment starts in response to the record low vacancy rate. The PEI economy continues to outperform the other Atlantic provinces, driven primarily by increased capital project spending as well as strong population, income and employment growth.

CMHC uses the trend measure as a complement to the monthly SAAR of housing starts to account for considerable swings in monthly estimates and obtain a more complete picture of Canada's housing market. In some situations, analyzing only SAAR data can be misleading, as they are largely driven by the multi-unit segment of the market which can vary significantly from one month to the next.

Rural starts were estimated at a seasonally adjusted annual rate of 15,391 units.